Instead of photographs, let’s suppose we’re just looking at vectors, i.e. points in space, randomly drawn from some unknown distribution.

Part of the crabs dataset in R’s MASS package.

In the image above, the points clearly vary most along some diagonal line. There are a few things we might want to do with this:

1. We might want to plot the data so that the axes represent key features. In this case, we’d like to rotate the plot, so that this diagonal line is along the horizontal axis.

2. We might want to plot the data so that a point’s position on one axis is linearly independent of its position along the other ones. In this way, we could generate new points from the distribution without having to overly worry about covariance issues, because we can generate the position along each axis separately.

Happily, PCA does both of these. 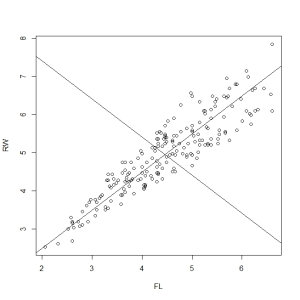 The new perpendicular axes. Note one appears to go along some sort of central line in the data.

The data plotted with respect to the new axes. The data’s variance clearly increases from left to right, but the covariance is zero.

I might get round to looking at the mathematics behind how PCA does this in a later post. For now, let’s see how PCA works for our photographs.

The first step is to find the mean face, which we did last time. If we now subtract the red, blue and green intensities for pixels of this mean face from those of the originals, we get this shifty group. 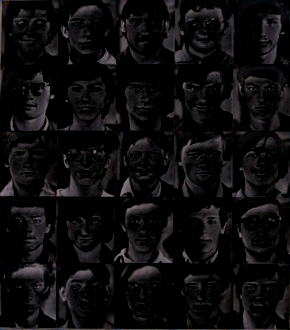 The “difference faces”, with thresholding.

These faces look very dark. The reason for this is fairly simple: when we subtract the mean face, a large number of the colour intensities will end up being negative, rather than in [0,1]. R refuses to plot anything when this happens, so I’ve simply told it to count negative values as being zero — pitch black. Later on, I’ll also count values greater than one as being one — pitch white. Jeremy Kun notices the same tendency to darkness, but doesn’t really explain why: I suspect Mathematica, the software Kun uses in his post, does this “thresholding” automatically.

As an alternative to thresholding, I’ll often be linearly “rescaling” images, so that the smallest intensity goes to zero, and the largest goes to one. For the “difference faces”, since subtracting the mean face is also a linear transformation, rescaling means we get an image that’s pretty similar to the original. 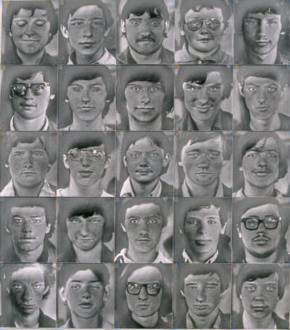 The difference faces with rescaling.

So far, so good. Now for the eigenvectors, or “eigenfaces”. Remember, these represent the directions in which we expect variation to be independent, with highest-variance directions first. The photographs are

pixels in three colours, so these vectors have

elements each, and are each normalised so that the sum of the squares of their intensities is equal to one, so it shouldn’t be too surprising that their intensities are all close to zero. This makes thresholding useless, so we just show the rescaled version.

The eigenfaces, rescaled. The rescaling was done ignoring the last face, as this is essentially random noise, with a far larger intensity range, but no informative value.

These are certainly less sinister than those in Kun’s article. I assume this is the consequence of looking at such a homogenous set of people, and Türk doing a good job of positioning everyone in the same place in the frame. Such a small and cooperative data set makes this blogger a happy little theorist.

We wouldn’t really expect these eigenfaces to exactly align with introducing or removing different face features, but looking at them shows some features a lot more obviously than others. For example: the first eigenface appears to be determining asymmetry in lighting on the two sides of the face; the second one partially accounts for glasses, and how far down the hair comes over the forehead; eigenface nine accounts for asymmetry in how far the hair comes down on each side of the forehead, and also looks rather similar to the original face nine, since that is the only face with such a drastic asymmetry; and so on.

So, what can we do with these eigenfaces? Well, we can easily decompose a face into the mean face, plus a linear sum of the eigenfaces — twenty-five of them, here. If we want to reduce the size of the data, we can start throwing out some of the eigenfaces. In particular, since we’ve calculated how much variability there is along each eigenface, we can throw out the least variable ones first. This way, we minimise how much of the variance between the faces is thrown out, and so keep the faces as distinct as possible.

To illustrate this, we can introduce the eigenfaces for a face one at a time, to observe the effect on the image: 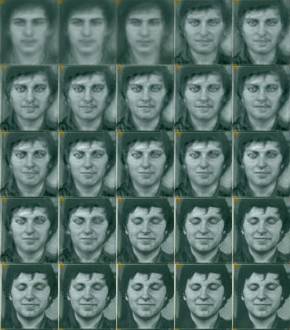 Progression for face one. 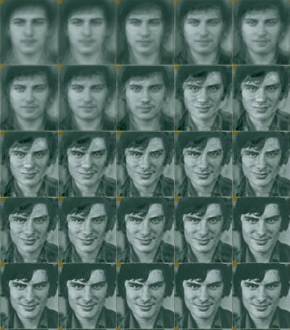 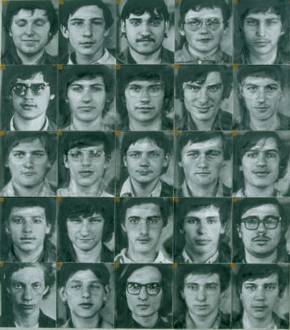 Class Average I, reconstructed using only eighteen of twenty-five components.

Faces like number ten are a bit vague, but that’s mostly pretty good.

So, what else can we do? Well, since we know how faces vary along each eigenface, we can try generating sets of new faces. The results can be, well, rather mixed. Sometimes the results look OK, sometimes they don’t look convincing at all. 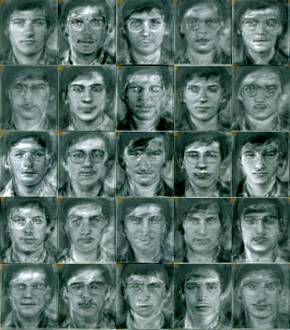 This set doesn’t look too convincing to me. 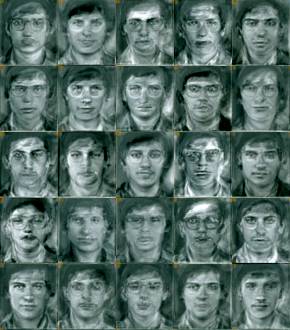 This one looks better.

This is probability mostly due to my sampling the value of the eigenface components as independent normal distributions, which makes no sense in the context of the problem.

That’s about it for now. There are a few diagnostic plots I can show off once I find them again, allowing you to do things like assigning a quantity to how distinctive each face is from the rest of the set (nine and twenty-one stand out the most), and a more quantitive assessment of how many eigenfaces to throw out while keeping the faces distinguishable.